Stealing From The Dead 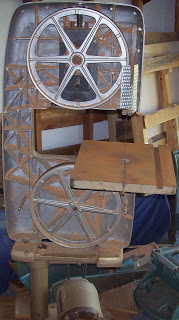 It’s true. I’m a thief, a scoundrel, a scallywag. My victims are totally helpless, and I swoop in a take what I need. They cannot stop me. I’m not in the least bit repentant about it. In fact I’m proud of it.

I say, “If your silly enough to pass on with nice stuff in your garage, it’s your own fault when your wife and son sell it to me for next to nothing!” My soul is absolutely filthy. I need help.

I don’t remember the exact date, but sometime in September I found myself souring thorough Craigslist when I found a posting for a ’12” free standing band saw for $25′. It’s not important what a 12″ free standing band saw is, or what it does, just know this. That price was UNHEARD OF! So I did what I always do on Craigslist. I waited three days and then sent a email like, “Are you still trying to get rid of your old band saw?” This is a low tactic, but not too low for a jerk such as myself.

After a quick look, I knew I had to have it. It looked horrible (see picture), all covered in rust and sawdust siting there dressed in a 1950’s gold paint job. But in general, old tools last forever. This thing was made from cast iron and steel. New jobs are loaded with plastic, which just doesn’t last. Under all that ugly, I saw a gem.

So I curled up my lip and said, “Does this old thing even run?” We plugged it in and she ran like a dream!

This gentleman was selling his fathers old tools for his mom. His father has purchased them in the mid 50’s, and took good care of them, but passed away in ’82 or so. They have just been sitting dormant in the garage for 25 years. His mom was moving so they needed to be sold. He was also selling a Shopsmith for $50 (another awesome bargain) and some other power tools way below market price. Was it my responsibility to tell him? Absolutely.

Instead I offered him less. I offered $65 for both units, and I’d “take them off his hands”. He was so thankful he helped me load them into the truck. I’m a swine.

So after a bit of work, the band saw is working like a dream! All the rust is gone, her table has been leveled, parts oiled and bladed properly tensioned. She’s cutting through wood like an absolute wonder. The Shopsmith was too big for my shop, so I’m selling it in pieces on Ebay. I’ve already recouped what I paid for it and I think I will more than triple what I spent.

So there it is. I’m scum, I steal from the dead, and gloat online. All in all, I couldn’t be happier.

2 thoughts on “Stealing From The Dead”