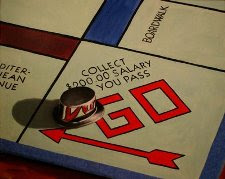 There are few things as defeating as starting over. When you believe that you have completed a project, paper, blog or task to realized that something is not satisfactory. You sit there putting the finishing touches on it when it hits you like a ton of bricks. You begin to rationalize. It’s not that bad, I can fix it. No matter how hard you try, you know the truth of it cannot be escaped. Life is about to teach you a valuable lesson that you will shell out for in heaps of wasted time. Buckle up.

So you just finished the most amazing wrapping job on Earth. Perfectly folded corners and the most delightful bow you’ve ever tied. I mean, honestly, when does curling ribbon ever curl that well? Only when curling ribbon knows what you don’t. It knows that you’ve been a total stooge and left the “HALF-OFF CLEARANCE” sticker smack dab in the center of Aunt Betsy’s gift.

I recently found myself at the end of a woodworking project. It wasn’t anything horribly involved, but in my mind it was nearly complete. It took me about 10 hours or so to get to this point, and this point wasn’t pretty. No sir. My design, with two floating shelves, looked great on paper, but as paper doesn’t have to worry about real world physics, it can’t be blamed for failing to support itself in real life. Turns out I should have known better. Well, I do now…

As I stood there staring at it, I knew I what I was going to have to do. I didn’t want to. I was getting down on all fours looking at it from weird angles. “Well that looks fairly good.” I wanted to bust out the duct tape and bailing wire. Have you ever been there? Pretending you can fix a broken levy with a bucket of paint? You begin reasoning with yourself.

“Well, when you kinda close one eye, and tilt your head to the left…it’s really not that bad.”

“Are we talking about the same cabinet? I’m looking at the one that’s shaped like a ‘V’. Where’s the one your blathering on about?”

“Is it really that far off?”

“You could check it for square, if you’d like a good laugh….”

“-sigh-. I’m going to have to start over from scratch.”

“No doubt! You might want to even burn your old plans, just to be on the safe side. Better brew another pot of coffee.”

I knew I was going to have to start over and re-design it from the bottom up. So I just bit the bullet and dismantled the entire thing. In the end, I’m glad I did, it turned out much better, and much more stable. I’m nearly done again. And this time, it looks like it’s suppose to. Sometimes starting over, is just a simple fact of life. That being said, if I find some major flaw that I’ve overlooked… you can bet I’ll be reaching for my can of paint!