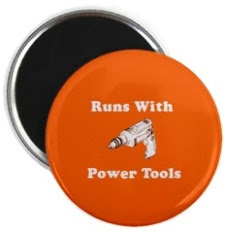 “Runs With Power Tools” It’s my Indian name. I just upgraded it from, “Collects power tools and never uses them, even though he has a workbench.” It was a bit awkward anyway. Introductions at parties were always a bit lengthy followed by a fairly pregnant pause.

Recently I have decided to try and build some stuff with my tools. It’s funny because I really do have a nice selection of tools that I had never put to any real use. So there I am in my garage at my workbench which was was all together well organized, neat and tidy. In other words, it was a complete travesty. In only eight short hours though I fixed it. I fixed it as only a real man can. I turned into an absolute pig sty but in the mist of this pile of sawdust, wood chips, glue, nails and tools was a box. A box that I created.

The box was not square. The edges seemed to wave a little like it was cut by some recovering drug addict trying to keep his mind off the last fix. In addition I had a number of grooves that were not referenced in the initial design. So there I stood, with copious amounts of sawdust in my eyebrows and splinters in my hands, staring at this slightly misshapen, severely over glued, excessively sturdy box of wood, sweat and altered visions.

With each new project I attempt I find that my techniques are becoming more refined. For instance I now understand how to correctly use a straight edge and clamps while wielding the awesome power of my 15amp circular saw. In fact if CAL-OSHA had seen my first few saw cuts I would have been shackled and hauled away, correctly labeled as ‘a danger to self and any immediate society.’

But now I got that down. Mostly. Luckily there are plenty more deadly tools in my ‘arsenal of destruction’. I would say the shear shearing torque housed in my router is enough to destroy any piece of wood I incorrectly feed into its whirring blade. There is nothing quite like pitching wood pieces around the garage as the router blade grabs and sticks in a nice hard knot.

For the most part though it’s a blast to pick up a tool, and be like, ‘I wonder what this is for?’ I know I bought it, or was given it for a reason, but I’ve never used it before. I think I’ll try it out. Currently I have constructed three projects in the last three weeks. I have tried things, failed, tried again, failed some more but learned during the process. In the end I have three new objects that cost me slightly less than if I’d purchased them outright, but not by much.

I’ve already dreamed up three new projects and two of them are pretty adventurous. I’m just happy to finally be shaping wood to my will and getting something that I can say, “Yeah, I made that. Yes, I think I can do better.” Which in the end is all anyone can really hope for.