A Zoetrope is an animation toy that literally translates to “life turning.” While I had many challenges on this build, I have to say is it easily one of my favorite creations. I also have a particular fondness for making toys. 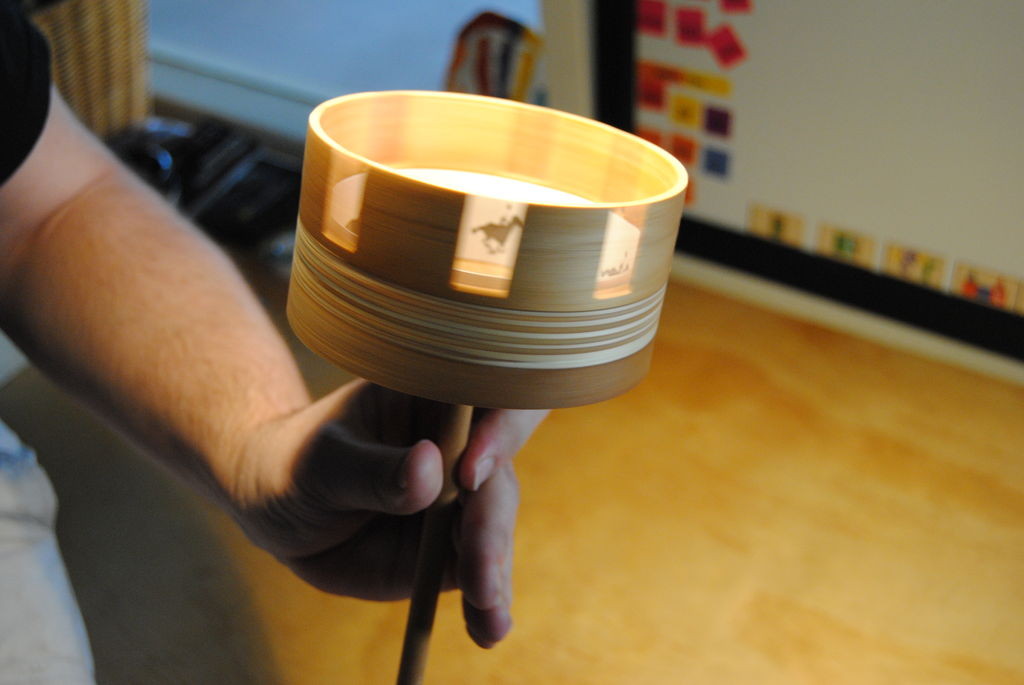 This project started off life  2 – 3/4″ blocks of maple sandwiching a piece of 3/4″ cabinet grade plywood. 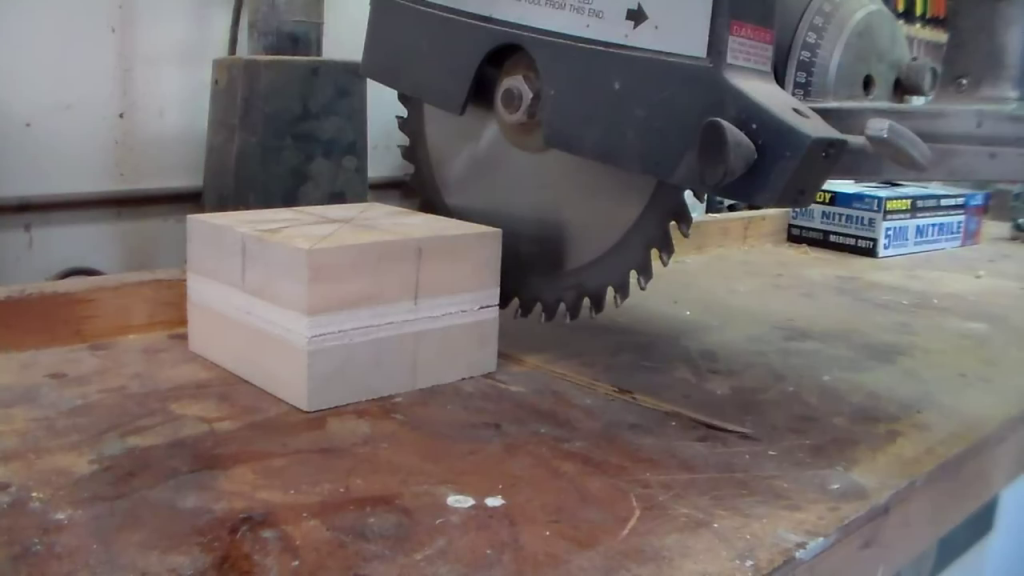 In order to make it the zoetrope I needed 8 slits in the top evenly spaced around the circumference of the circle. I could try and cut these out after words, but the walls of the piece would be rather thin. I devised many solutions for cutting these, but none seemed really practical to get 8 evenly cut slits. That was until I realized I could easily cut them on the radial arm saw before the turning, and I could get even cuts with the fear of breaking of the thin pieces. 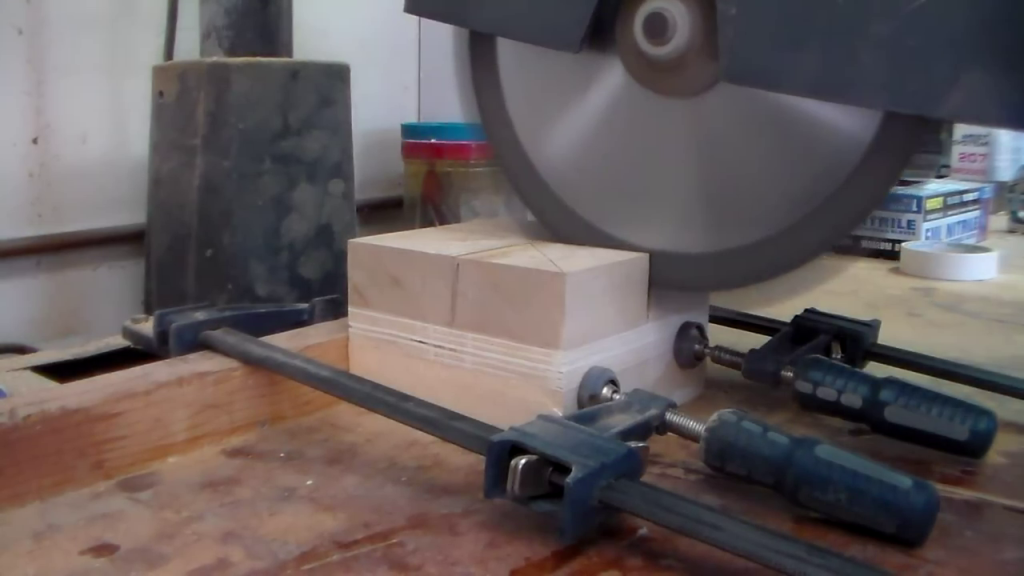 This is a scary cut. The blade is raised up very high and the clamps are closer to the blade than I would like. Please do not attempt this unless you are sure of your setup and your comfort level with the saw. 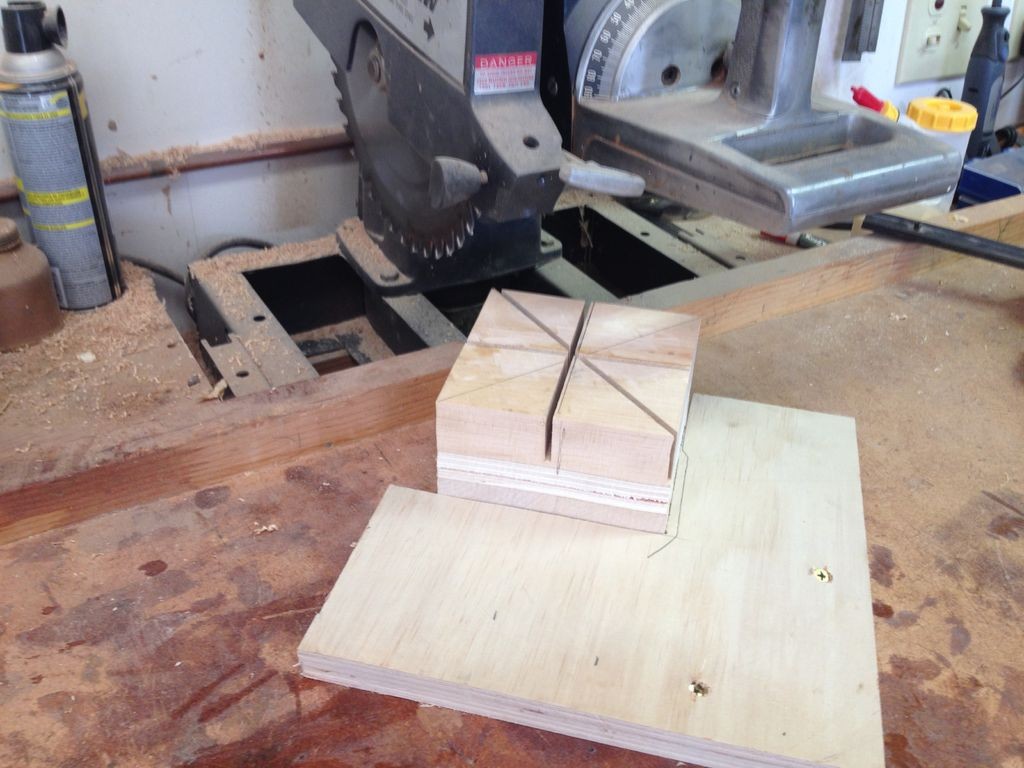 For the angled cuts I came up with a much better clamping method. A piece of plywood screwed to the table. It holds the work piece firmly and doesn’t add the danger of any clamps slipping loose.

After the cuts were made it was off the the lathe, after a quick stop at the band saw to knock off the corners. and then rough turned the block into round at the lathe.

My main worry was that the wedges would de-laminate from the block due to the turning. I took very light cuts with the bowl gouge and tried my best to not get a catch. I added a tenon on the end so that I could grab it in the chuck jaws for hollowing out the main body of the zoetrope. 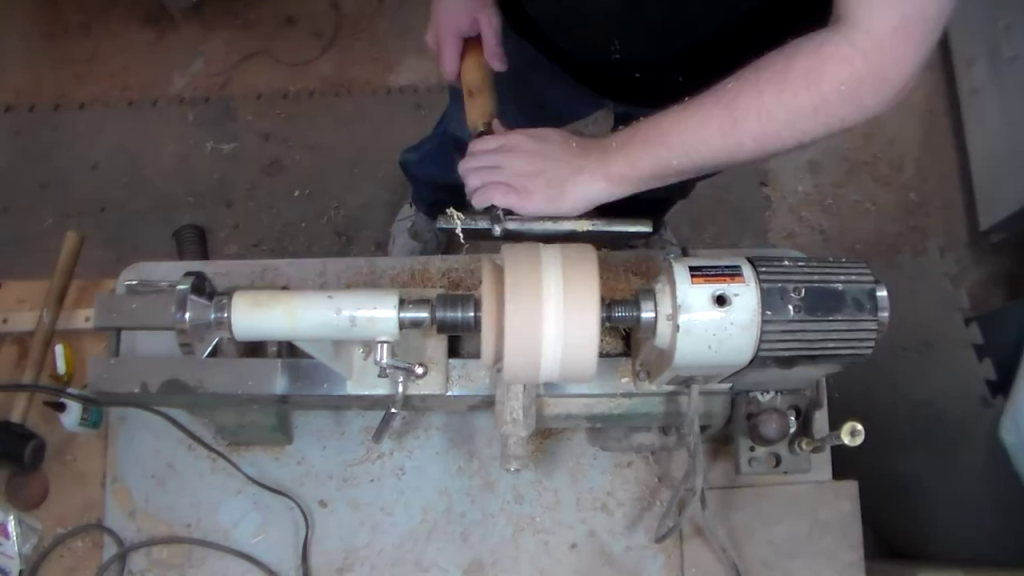 First step was to removed the center material with a 1″ forstner bit. This would help to tell me later where the bottom of the cup was, and removed the material from the center, so I wouldn’t have to try and hollow it out with all those saw kerfs in there. 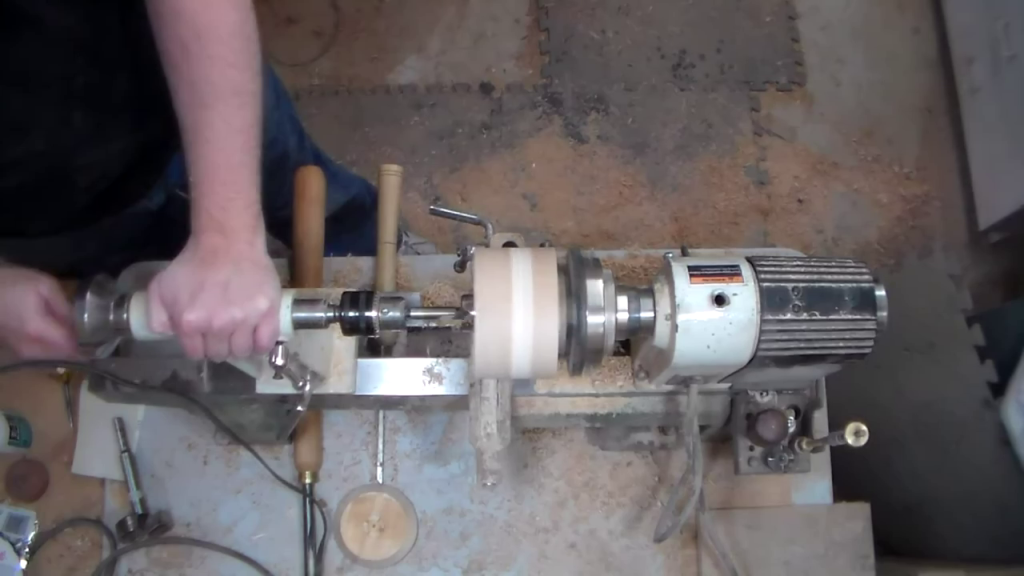 Hollowing was done with a square nose scraper, again to reduce the possibility of catches. But first It was slow going but after about 20 minutes I had it hollowed out and the walls as thin as I was willing to go. 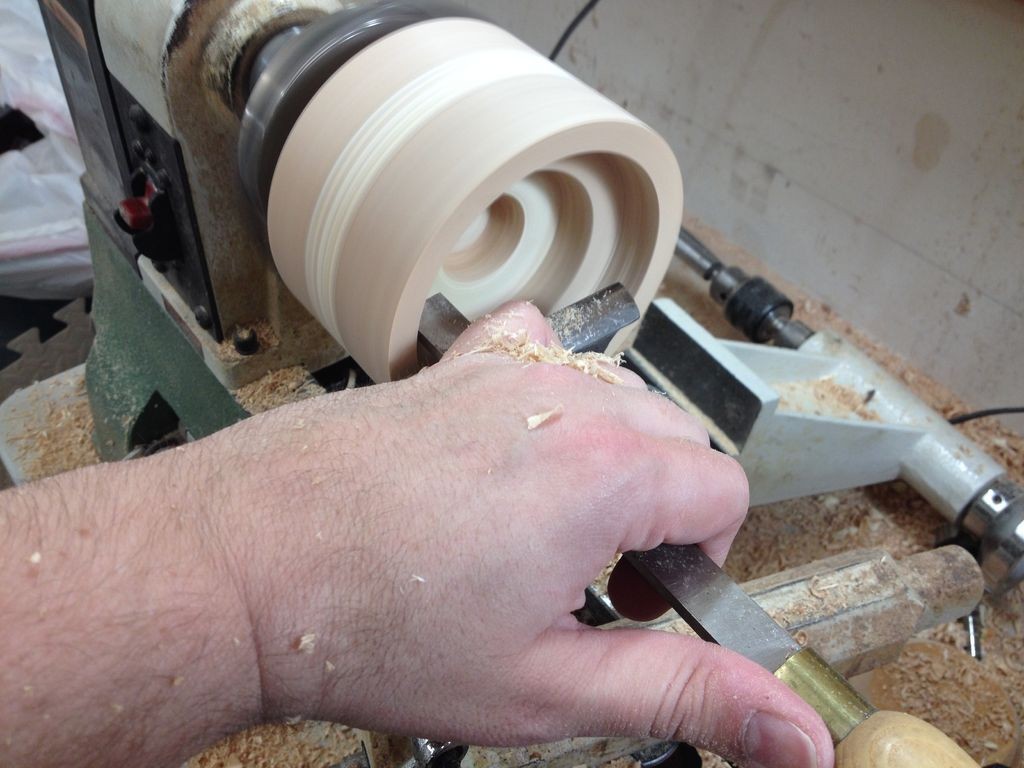 I drilled a 3/8 hole in the bottom center and attached a 2 foot section of dowel.

Since the walls were still a little on the thick side, I took a sharp chisel and chamfered the inner corner of each into what I think of as arrow slits from a castle tower. This keeps the windows uniform from the outside, but also allows for a better flowing animation. 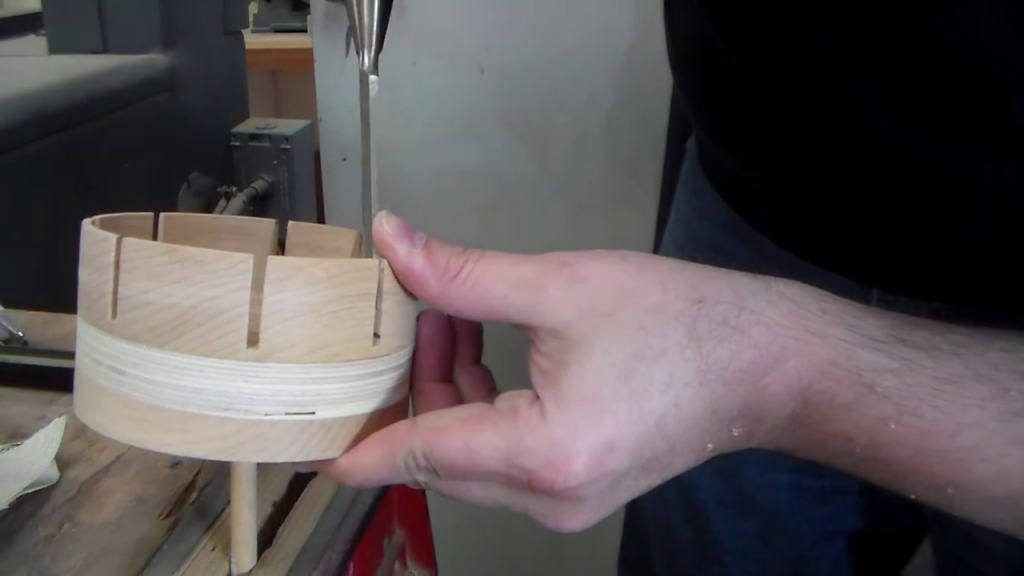 I realized it was easier for me to control my chisel if I secured the work back on the lathe! 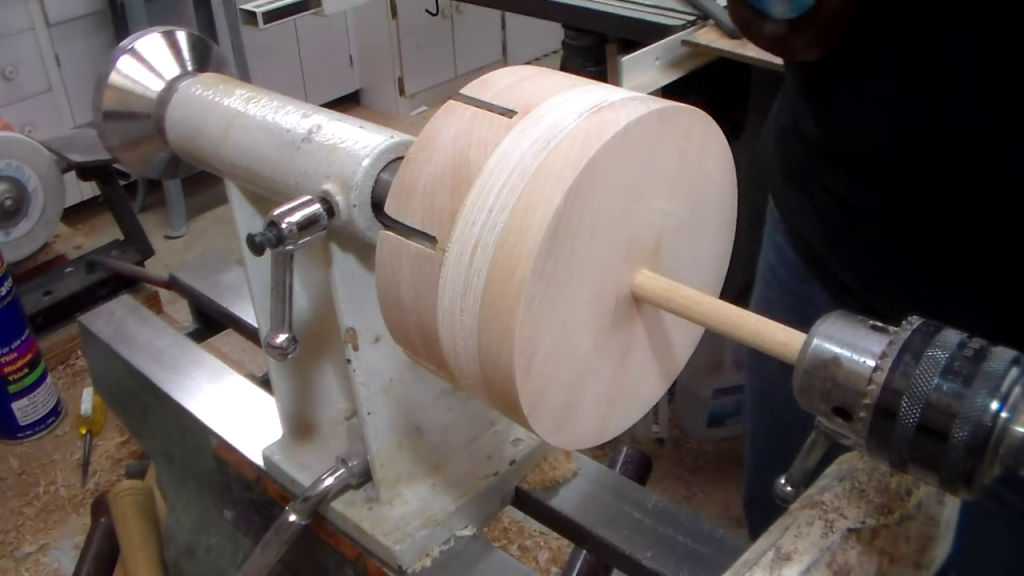 Step 4: Finish
I used boiled linseed oil as a finish. It’s easy and darkens the wood. Traditionally you paint the outside black, but as a woodworker, I was hoping to avoid that! Three coats and I called it good. 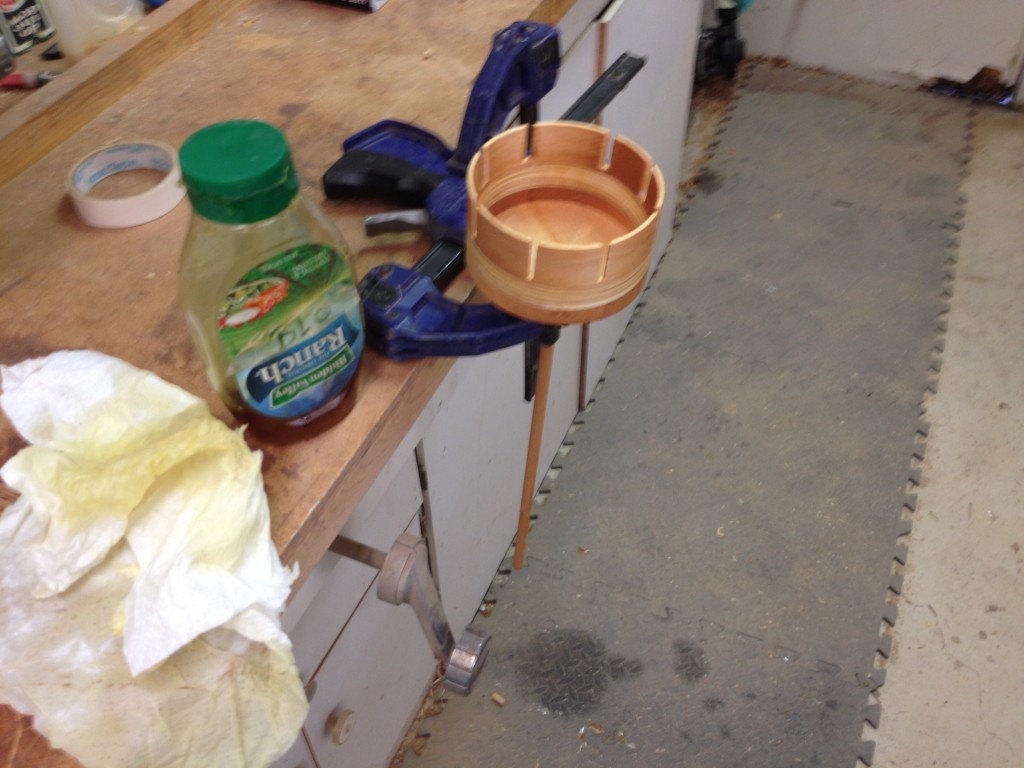 The zoetrope works really well and you can find lots of different animation strips online. You also can make your own if you have the skill! (which I do not…) 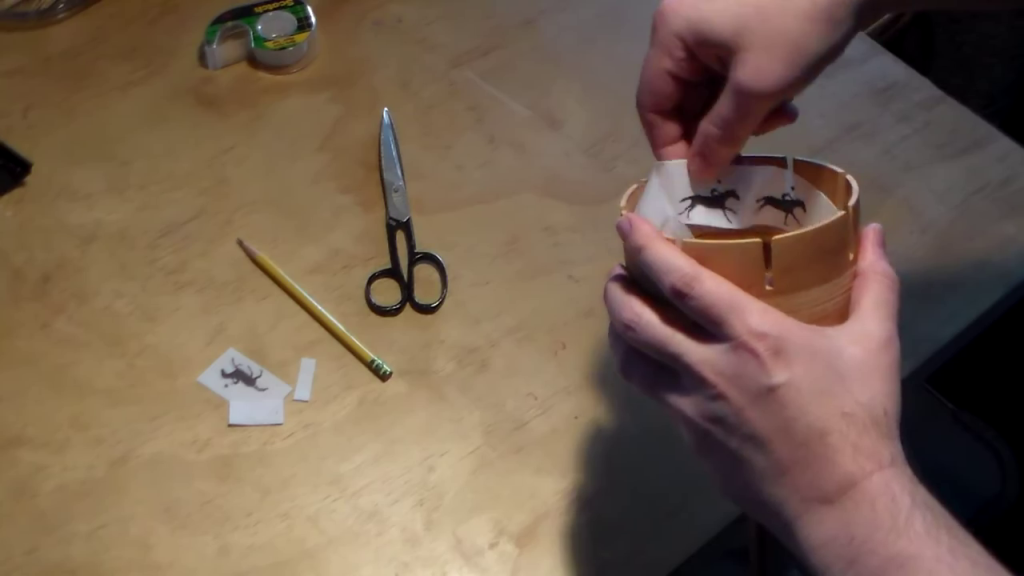 One thought on “Making A Wooden Zoetrope”