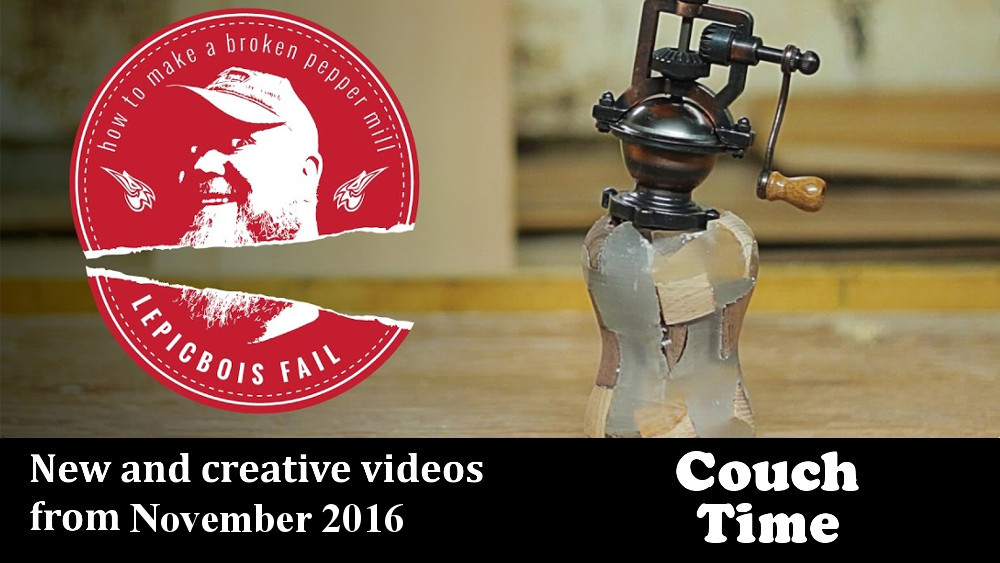 Welcome to November’s installment of Couch Time! Each month, we will bring you a selection of videos covering interesting projects from other YouTube makers working in a variety of media.

We are big fans of mistakes. Huge fans, really. Everybody makes them, no matter how experienced they are or how perfectly their videos are edited. Peter made his own mistakes in the recent Micarta video, which he finally published after eight months of pretending the footage didn’t exist. So for this episode of Couch Time, we’re going to highlight videos that show those mistakes.

Bob Clagett takes us behind the scenes of his Batman Mech Helmet build. Foamwork is a relatively new area for Bob, and he made several failed attempts before creating the final product. Third time’s the charm, right? Not this time. The fourth build finally worked out and it looks great.

Jimmy DiResta’s Make: video covers the creation of a mold for his aluminum-handled hatchet, then the casting of several duplicates. Except the silicone was old and separated, and the casting resin created a soft “gummy axe” instead of a rigid one, and the mold started breaking down, and about a million other things. The moral of the story here is that Jimmy adapted, kept working, and got the job done.

How to make a broken pepper mill – Le Picbois

Pat Lap, aka Le Picbois, has a cool idea for a pepper mill. He embeds chunks of wood in resin and then turns them on the lathe. Or at least he tries to until the tool catches, tears out a giant chunk, and cancels the project. True to form, though, Pat handles it in a really funny way.

Bryan Bales makes a really clever adjustable phone holder that works on a standard tripod and fits many different phones. The project is simple and kind of brilliant, really. So why is this in the mistake edition of Couch Time? Because NOBODY WATCHED THE VIDEO. Seriously. Bryan has over 3,000 subscribers and released this video almost a year ago, and the video has less than 600 views. Yeah.

Carlos over at Cactus! Workshop does some amazing stuff. On this project, though, he was supposed to make some custom guitar picks for a friend. What he made instead was a lot of melted plastic and two guitar picks — one of which he kept for himself. His sense of humor about the whole thing is what makes this video (and all of his videos) special. Go check it out.

That’s it for November! Have a great month. If we missed any spectacular failures or entertaining mistakes, leave us a comment and tell us about it. We will incorporate reader feedback into next month’s column.