This is actually the second box I made this weekened. The first one came out great, but I had a major allergic reaction to it. So much that I had to toss the wood and wait a day to get back in the shop to make a second.

As good warning, some woods are more prone to this than others…

So I ended up using my leftover from my wine barrel blank. As such the shop smelled strongly of wine during most of the build. 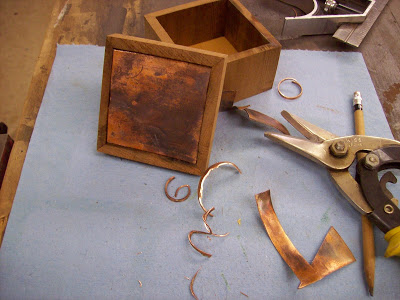 I suppose I can pretend that is the reason for me acting a bit silly on film!

The copper was just a 1″ copper pipe from the hardware store. Cut open, pounded flat and heated with a torch. I also got to try mixing epoxy with coffee grounds. I helped fill some gaps in my copper inlay, and also smelled quite nice.

Although I forgot to film it, I did spray the box with two coats of lacquer. I guess I just got a little ahead of myself!

This rainbow crayon vase has endured 5 hot Californian summers in my garage. It’s not melted or damaged in the least. I did add some resin to the bottom shortly after making the video on some viewers suggesting it.
I forget that people like seeing things I made years earlier. 🙂

We had a causality! My resin wand jumped off a shelf.
Luckily I know a fella with some glue.

My close friend Chris from @onedoorworkshop came out for a visit all the way from Michigan. We played with resin and played in the lathe!!